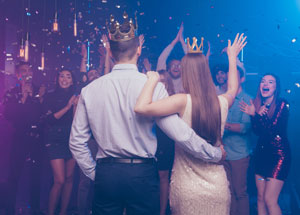 Are you a Prom Advisor tasked with planning Prom coronation and aren’t sure where to begin? Check out our Prom Royalty: Trends, Traditions, and More downloadable for coronation tips and ideas. In the meantime, take a look at these answers to some of the most common Prom coronation questions to help you get started.

WHO makes up the Prom Royalty?

Traditionally, there is a Prom Queen, a Prom King, and a court.  You can leave it at that, or you can include more students by choosing specific court members like Prince, Princess, Attendant, Duke, Duchess, and even a Jester.

WHAT should Prom royalty wear?

If you want to follow tradition, you’ll need royalty accessories, like crowns for the King and his court, tiaras for the Queen and her court, and sashes for all. For a more casual look, dress the guys in light-up fedoras and accessorize everyone with prom wristbands. For a twist, present your royalty with fun wearable favors that match your theme, like sunglasses, masks, leis, or glow necklaces.

WHEN should we do what?

• One month before Prom: order royalty accessories for your King, Queen, and court.

• The week before Prom: Have the entire student body vote for Prom King and Queen.

WHERE should the winners be announced?

There are many options for announcing and presenting your Prom Royalty:

• Announce and crown the winners at Prom.

• Announce and crown the winners at Grand March.

• Have a special ceremony during the school day for students.

• Have an evening ceremony for entire community.

WHY should we have Prom royalty?

• Tradition. You just can’t have Prom without Prom royalty.

• Memories. Your Prom royalty will remember coronation for a lifetime.

HOW should we present our Prom royalty?

The sky’s the limited when it comes to presenting your royalty. Here are a few ideas:

• Roll out a red carpet and have them walk out in Hollywood style.

• Have your royalty do a skit or a dance based on your Prom theme.

• Have them parade in singing your school song.

Remember, Prom coronation can be whatever you want it to be. Whether you’re going traditional or trendy, formal or casual, it’s all about your school, your teens, and your style. So make it your own. Happy planning.